Blow Your House Down is no forgettable fairy tale. This memoir of a marriage that falls apart followed shortly by a brush with death will stick with a reader long after she finishes it.

I read Blow Your House Down: A Story of Family, Feminism, and Treason back in December, and I’m still awed by how author Gina Frangello weaved together the very personal, gut-wrenching demise of her marriage and her battle with cancer with the greater societal perspective of what it means to be a woman in the modern age. The book came out last month in paperback.

Frangello writes about her coming of age and her parents, about passion and sex, about guilt and anger and about health and her body, and yet every word of this one woman’s story carries a message about all women and how society views their indiscretions and their roles. I found the story to be both scary in its candor—I mean, her children could read about her hedonistic desires someday!—and fascinating. The book jacket is filled with blurbs using words such as “honest,” “subversive” and “harrowing,” all spot on. Even the book cover is unexpected. A drawing of a fearsome toothy blue wolf stands out against a pink background. This is not your typical memoir.

Maybe I’m drawn to memoirs of adultery because I wrote one (The Percussionist’s Wife). As I’ve warned in reviews of Cleaving: A Story of Meat, Marriage, and Obsession by Julie Powell and Vow: A Memoir of Marriage (and Other Affairs) by Wendy Plump don’t read Frangello’s book if you can’t stomach a narrator’s licentious choices. Admitting to a bit of masochism, Frangello puts it all out there in a way a fellow memoirist can appreciate, but candid storytelling about one’s extramarital affair opens her up to criticism from judgy readers. She knows it, too: “What is the line between self-acceptance, self-love, and a refusal to take accountability?” she writes in one chapter, and then later, “We are all judged by the courts of distance and hindsight.”

Instead of critiquing her life choices, I appreciate the way she manipulates language:

Some reviewers have found this memoir to be graceless, angry navel-gazing—and most puzzling, “narcissistic”—but I frankly can’t figure out what those readers want to find in a memoir. Didn’t they pick it up to be enlightened about the author’s view on life? I found Frangello’s perspective is both clear-eyed and self-aware. She manages to pull back from the intimate to shine an honest light on the bigger picture. Here’s a bit of Frangello philosophy on aging that I appreciated, for example: “How do we measure a life’s worth? In laughter? In orgasms? In money? In how often we have been photographed? In children borne or raised? In the number of books published? In the latest versions of iPads and iPhones? In jazz albums filling a giant trunk in the basement? In years?”

Blow Your House Down might not be the typical beach read but it’s certainly a wild distraction from the mundane that will transport the reader. This story is a walk in another woman’s shoes; but for one who is not up to feeling the pinched toes and blisters on her heels, one might be better satisfied with a more predictable “happily ever after.” 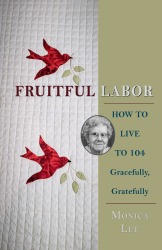 With a voice known for brave honesty, author Monica Lee shares a heartfelt portrait of her grandmother in Fruitful Labor: How to Live to 104 Gracefully, Gratefully. Also in 2020, Church Sweet Home is the story of renovating a 126-year-old Methodist church into a dream home. In previous works, she opens the pages of her teenage diaries and reveals the story of the year she turned 15 and learned to French kiss in Truth, Dare, Double Dare, Promise or Repeat: On Finding the Meaning of “Like” in 1982. She shares her formula for being healthier, stronger and hotter in How to Look Hot & Feel Amazing in Your 40s: The 21-Day Diet, Exercise & Everything Makeover Plan, a combination health-and-fitness memoir and a to-do list. In her debut memoir, The Percussionist’s Wife: A Memoir of Sex, Crime & Betrayal, Lee explores themes of fidelity, faith and justice; it’s the true story about the demise of a marriage after revelations of adultery and criminal sexual conduct. She has also contributed to 8 Slices of Cake, a romance anthology, and to More Than A Coincidence: True Stories of Divine Intervention, an anthology of inspirational faith testimonies. A native of Minnesota, she is a writer, blogger, book designer and photo organizer.